“Nomen est omen” has always said it all here. This is particularly relevant for a landscape and yet a name is never a simple label – it is alive as anything else that grows. (more here) 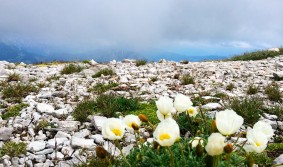 The name of this massif, with its weighty sounding combination of “Tot” (dead) and “Gebirge” (mountain range), both prompts questions and immediately conveys a sense of meaning. The mountain range was probably given the name due to its strongly karstified high plateau, where rain and snow quickly seep into the karst system, making the eastern section in particular very arid. Another theory of the name’s origin is based on the historic importance of the mountain range for salt mining. Salt has been mined in the area around the Sandling massif to the southwest of the Totes Gebirge mountain range since the 11th century. There was, however, no salt to be found in the adjacent Totes Gebirge and the place could therefore, in this sense, be described as being barren or dead.

But maybe it was the perception of this inhospitable and desolate high plateau, unsuitable as it was for human habitation, which lies behind its name. This perception is reflected in the words of Archduke Johann: “I recommend that good mountain climbers visit this wasteland… here one can breath freely and also think freely, as one is so high above the commonplace… all thoughts about the wide world, all worries disappear.” (from the foreword by Lutz Maurer in: Lutz Maurer: Mein Zauberberg, Grundlseer Schriften, volume 2)

The Totes Gebirge mountain range is one of the most striking areas of karst massif in the Northern Limestone Alps. It is characterised by an extensive high plateau and has steep high cliffs on the side 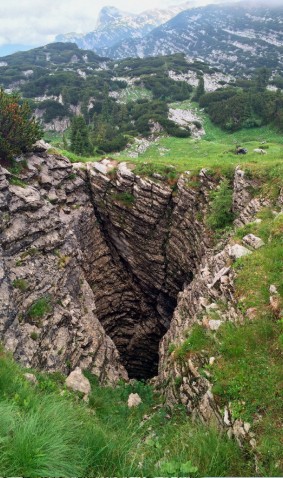 facing onto Styria. 300 square kilometres in size, the massif is one of the largest karstified upland areas in Europe. The summit altitude of the region climbs from south to north and from west to east, reaching its highest point at the Großer Priel Mountain (2515 meters) in the northeast. The entire plateau surface is drained by an underground karst drainage system, the water appearing in the valleys in the form of large springs.

Various forms of karst topography can be seen here such as dolines – sinkholes –, crevices, shafts, clints, and, most importantly, the many cave systems. There are over 600 registered caves in the region and many of them have not yet been investigated. All have been placed under the strictest protection. The Schönberg cave system in the western section of the Totes Gebirge mountain range has a length of 135 kilometres and a depth of 1061 meters, making it one of the largest caves in the world.

The geology of the Totes Gebirge mountain range 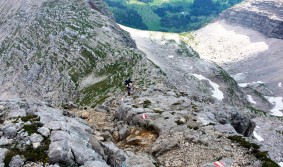 The main section of the mountain range is made of dolomite and limestone. These rocks came into being in the seas of the Mesozoic Era during the Triassic and Jurassic periods, around 210 to 135 million years ago. The Dachstein limestone is a light grey to white, lightly weatherable rock. It was first described by Friedrich Simony in the 19th century, who named the material after the Dachstein Mountain, which is composed of this rock. Famous fossils found in the limestone are pachyrisma grande molluscs, megalodon fossils, whose fossilised cross sections have the shape of a cow’s hooves. These fossils prove that the karstified surface used to be the seabed. It is thought that the megalodons had a similar existence to that of the giant clams now found in the Indian Ocean.

The Totes Gebirge and the surrounding area have the highest level of precipitation in Styria. A tailback effect in rain-bringing locations to the west and northwest leads to a high precipitation amount with local differences. High altitude areas have 2000 to 3000 millimetres of precipitation per year. The area is also greatly affected by long winters, with snow lasting for around 5 to 6 months. In the larger karst cavities, inversion causes cold reservoirs to develop. In some places, this inversion also causes ice caves and sinkholes, which remain covered with ice throughout the year.

Vegetation of the high plateau 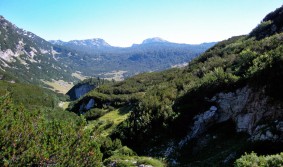 The forests in the region are all subalpine with coniferous forests consisting of varying proportions of spruce, larch and Swiss pine. The distinctive features of the karst and the pasture usage give the forests a relaxed, park-like character.

The transitional area between the forest and the tree-free area, referred to as the so-called battle zone of the forest and the krummholz formation belt, is found throughout the sparse forest without any clear boundary line. Mountain pine shrubbery finds its way into a few areas, such as at cliff heads. The higher areas are dominated by mountain pines, where there is only the odd tree to be seen. There is then a change in the types of trees: spruce and larch make room for Swiss pines, which therefore dominate the highest points of the forest.

Neither does the krummholz provide a clear barrier; the mountain pines form a long and dispersed borderline stretching into the alpine meadows, irrespective of ground or exposure. The boundaries are far clearer in the alpine pastures, where mountain pines are cleared and pushed back.

At the forest border, tree growth is restricted. The short vegetation period and the frequently stronger wind cause stunted tree formations to develop, prompting the descriptions of krummholz belt and battle zone of the forest. The long period of snow coverage and the pressure caused by the weight of the snow makes it difficult for the trees to grow vertically. The altitudinal belt between 1600 and 1900 meters is therefore characterised by its various forms of crippled tree growth. Bizarre shapes of treetops and tree trunks as well as irregular formation of growth rings provide visible proof of the tough conflict between the trees and their environment. The low, twisted growth of the mountain pines and their flexible twigs and branches makes them particularly suited to coping with the tough climatic conditions.

With its high level of biodiversity, the habitat of the Totes Gebirge mountain range is particularly deserving of protection. In 1992, a directive defined the region as a strict nature reserve with a core area and border area, with forestry use being prohibited in the core area. The forests in the region have now been put out of use for a period of 200 years. In 2006, it was classified as a European Protected Area according to the Habitats Directive and the Birds Directive. Some bird species were defined as particular targets: their existence is so important – also for Europe as a whole – that their numbers are not to be allowed to decline. These species include the black grouse, the wood grouse, the golden eagle and various types of woodpeckers.

For centuries, traditional, extensive transhumance has shaped the landscape of the high plateau and nature protection will foster this usage as far as is possible. With an overall size of around 24,000 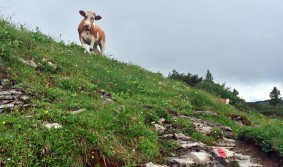 hectares, this protected area is one of the few landforms in Austria that has not been developed. The west is owned by Österreichische Bundesforste (Austrian Federal Forests) and the east by Baron von Baumbach. Together, they share the challenging responsibility of maintaining the original qualities of this valuable natural landscape.

DI Dr. Karin Hochegger (*1965 in Vienna, living in Bad Mitterndorf) is responsible for the NATURA 2000 European Protected Area of the Totes Gebirge mountain range. Alongside her work as region manager, she publishes on the topics of landscape conservation, nature conservation and horticulture.