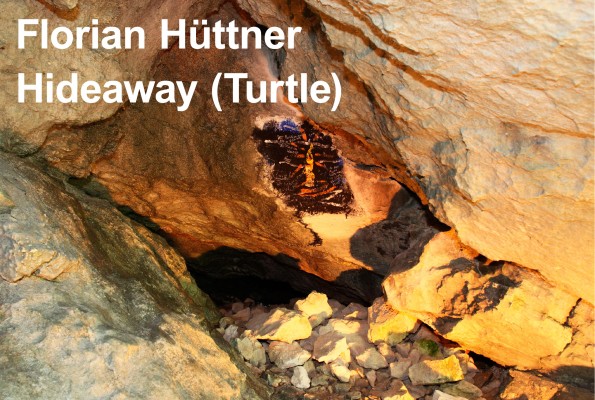 A painting on rocks in the Totes Gebirge region. Hüttner is inspired by the spatial situation of the Igel (Hedgehog) hideaway, which he equates to the protection in a cave. The mural on rocky stones in a hideaway nearby Naglsteig sets out to express the vague, uncertain, and also uncomfortably harsh and painful facets of the historical situation. Showing a propaganda motif in Ukrainian Cyrillic, “Partisans, to arms!” from the Russian partisan times. The partisans were fighting irregularly with all means against Hitler. At the entrance to the salt mine in Altaussee, a unique plate made of enamel will be shown. Hüttner presents at Kunsthaus a large scale drawing with ink and dispersion paint on paper about the same subject.

Translation of the Ukrainian Cyrillic partisan call: Partisans, take up your arms! The hour has come, for each of us, spare your life, to the end (you) must fulfill (your) sacred duty for the fatherland, in front of your nation. No matter where the enemy appears – there he must find his grave. So every house and building, so every village and place, brings death to the Hitler-like violent gangs. To battle! For Fatherland, for honor, for freedom, for Stalin!

The salt mine in Altaussee has dug deep into the Sandling mountain. The 1717-meter-high massif is located opposite the Loser and towers above Altaussee in the north-west. Salt has been mined here at least since medieval times, but probably even in Roman times. The Salzkammergut was under the rule of the Habsburgs since the 14th century. The mines and salt-works remained in state ownership until 1998. The Salzberg gave people a means of existence and inherited jobs. Salt-mining allowed them to stay in the area and provide for their families. This situation paved the way for the inhabitants’ special self-image and cohesion in a mountain region characterized by a difficult climate and hardship.

There were probably some loose ties between miners and the opposition group “Willy-Fred” headed by Sepp Plieseis. It is said that before the Igel was built in spring 1944, supporters had confirmed that no smoke could be seen from the mine that might have given the resistance men away.

The “resistance” in the Ausseerland was not a militant partisan fight. It consisted not only of antifascist underground work and organization, but also rebelliousness and contrariness. Some later indulged in boasting and arrogance, seeking to appear in the best light or to escape punishment for collaboration. Women generally made less fuss about their dangerous activities. A lot of information is based on word of mouth – oral history, as it is known. Many legends and myths weave around the well-researched history with its objectified narrative.

Among them is the partisan myth along with the retrieval of the artworks in the salt mine, buried treasures in front gardens, and the incredible, but true secret operation to arrest Joseph Goebbels. On orders of the British Secret Service, four locally known men parachuted into the Ausseerland with equipment during the night of 8 April 1945.

The operation failed before it even started, with the men landing dispersed far from their drop zone in the deep snow of the Feuerkogel in the Höllengebirge, forced to go underground. This gave rise to various legends: Albrecht Gaiswinkler from Bad Aussee, who had led the parachute operation, claimed to have properly formed the resistance only afterwards, something to which Sepp Plieseis also lays claim. Others say that there never was an organized resistance.

Hüttner combines painting with drawing. From painting he borrows the large format, the expressive gestures, and the armamentarium – and with the spontaneity and levity of drawing he visually conflates his thinking. 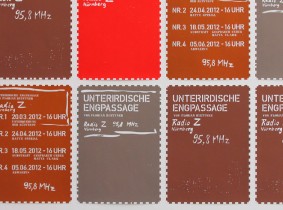 The large-format sheets eschew colour for the most part. The artist’s line is often coarsely applied by the brush, yet some detailed ink strokes remain visible nonetheless. Traces of kinetic energy cover the pictorial surface like borderlines – contouring, encircling, or opening. Delineated in the work is a certain corporeality. Hüttner overcomes any fixation on the surface in ways deviating from those used in modern painting, such as colour contrasting, to instead lend a literally space-consuming quality to his graphic works. Dimension, proportion, and installation are the spatial parameters of his art. Many sheets first unfold before the lingering eye. An initial impression is quickly imparted, but the delicate haziness of the motifs and themes requires more thorough reflection. It is indicative of spontaneous thrust reversal, hesitation and revision, roughness and delicacy. From the classic drafting sketch to the ink drawing, and even including photography and video, Hüttner uses methods of production to both draw and record. His stance is contemporary. He expands his artistic methods to integrate mass media like posters, videos, and radio broadcasting.

In the Totes Gebirge region, Hüttner will be working on creating a kind of cave painting – in a seam, let’s say, or in a partial cavern or recess that is somewhat protected and remote. Caves can be perfect time capsules. His rock painting is sculptural, working on and with the uneven ground. It is applied using biodegradable paints or pigments and is not meant to last for all eternity, exposed as it is to natural processes of change. Hüttner is inspired by the spatial situation of the Igel (Hedgehog) hideaway, which he equates to a cave in terms of its protective function, and establishes a retreat comparable to the Igel in a different place. The artist thematises the fact, still important today, that the Igel has given rise to narratives and legends, still anchored in local history like a myth. His mural sets out to express the vague, uncertain, and also harsh and painful facets of the historical situation. At the entrance to the salt mine in Altaussee, information about the site in the mountains will be presented.

Salt mine, Salzwelten Altaussee, Lichtersberg 25, A-8992 Altaussee
Footpath along the former Salzbergstraße starting in the Altaussee-Reith area.
Road signposted “Salzwelten,” heading for Ramsau, follow signs and turn left, driving on to parking lot.

From the Blaa Alm heading roughly 500m north, go right, slightly downhill, fork left down to the Rettenbach, then cross the bridge going right, and fork left to follow trail 226 through the woods over a small footbridge, then uphill to the Naglsteig.

Please bring a flashlight. This hideaway in the nature preserve may be accessed by way of exception. Protect your environment. Behave thoughtfully, please. Do not leave any garbage.