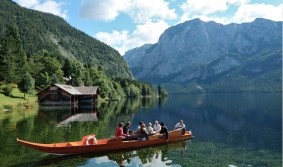 As is always the case, the situation becomes more complicated upon closer inspection. The Salzkammergut is rugged, a landscape region that spans three provinces and is no administrative unit in itself. Several sub-regional tourism associations have combined to form one umbrella brand named Salzkammergut. There are many historical salt mines and villages competing for recognition. The Salzkammergut can be seen to epitomise Austria, as all the characteristics of political Austria can be found here: Christian-conservative, social-democratic and German national, a little bourgeois-liberal, farmerly-proletarian, small, private as well as state owned businesses, Catholicism and, especially in this area, also Protestantism. And it is important not to forget the many immigrant citizens with different nationalities and confessions who make a living as migrant workers.

Since its romantic discovery in the 19th century, Salzkammergut has acquired the reputation of being a mythical, tamed landscape. The Viennese strolled along streets and paths, urban furniture decorated verandas, villas and coffee houses. As if out of nothing, an excess of idealisation developed – not just of the mountains, but also of the local people with their famously obstinate nature. 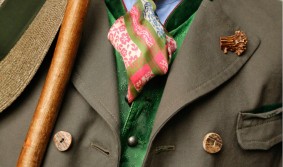 According to the dictum by Alfred Komarek, the Ausseerland in particular was seen as “stage behind the scenes”. People dress in traditional clothing, recognising each other even when they ignore each other. Informality is the order of the day, meaning that important people do not seem to be so important here. Important things are not formalised but rather decided on behind the scenes. There are, therefore, many sides to this image and, when considered from a historical perspective, the idyllic landscape of the Salzkammergut was no idyll.

In one of the hearts of the Salzkammergut, at the border between the provinces of Styria and Upper Austria, a chain of events developed over the space of a few years, coming to a dramatic climax in the spring of 1945. These events shaped history, their impact reaching far beyond the individual regions. The events took place on different levels, shaped by the pressures of wartime and by persecution by the totalitarian Nazi regime. A group of political opponents from the region hid in the mountains in order to survive and were supported primarily by women from the surrounding valleys. Several years earlier, the former imperial summer retreat, which had been regularly visited by Jewish holidaymakers, had already been transformed into an Aryan holiday resort for Nazi officials. Systematic expropriation and expulsion took place. The Ausseerland became a place of refuge and haven for high-level representatives of the Nazi regime as well as for collaborating Eastern European governments in exile. Looted art from half of Europe was stored in the salt mines in Ausseerland. 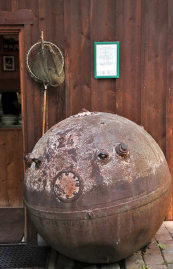 Plans had been made to destroy the art but it was possible to prevent this when the war ended. German soldiers threw incriminating evidence into the dark depths of Toplitzsee, meaning that further treasures are suspected to exist here. During the war, this picturesque, remote mountain lake was used as a secure place for military experiments. And, as if there were not already enough legends about the area, a group of Austrian political opponents parachuted over the Höllengebirge mountains in March 1945 on the order of the allied forces in order to capture Joseph Goebbles. However, he had already left. This chronicle of events came to an end when the American army arrived. The transfer of power went smoothly, since different opposition groups had their fingers in the pie. However, more opposition groups seemed to exist after the war than during the Nazi period. In the years that followed, myths, legends and cold conflicts developed, but there were other aspects that were not spoken about or that became taboo. Since then, many events have been historically proved but there are other aspects that one does not want to look into in any depth.

The preparative work for the art project Politische Landschaft (Political Landscape) shows that there are always two aspects to focus on when working with memory: on the one side, the events themselves, in this case spring 1945, and on the other side, the time that followed and how people come to terms with these events. One example is the way in which people who belonged to the persecuted opposition groups, hiding in the mountains and forests during the Nazi period, as well as those who helped, thereby putting their own lives in danger, were portrayed in a negative light and were cut out of history. During the time of the new Second Republic of Austria, this group was used to prove that the Austrian population opposed the Nazi regime. In the Cold War, the group was forced into insignificance, no longer being seen as socially acceptable. It therefore required the research of a committed and determined historian from Linz to bring the events alive again in the 1960s and 1970s by means of comprehensive documentation, making the events accessible for scientific research.

A historian experienced the difficulty in dealing with the events of the Nazi period when she organised an exhibition in Kammerhof at the beginning of the 1990s, focussing on the end of the war in Ausseerland. She discovered that many people were not prepared to provide material, as they were scared of inciting unrest. Discussing the various histories and stories of the people of Aussee, she explains what “really” happened regarding the saving of artworks, the arrest of Mr so and so. Or regarding the indirect to direct hints that it would be better to leave it, because there are still some relatives of somebody who had been somehow involved at the time, for whom they did not want to cause problems.

But what makes this region into a political landscape? Its mountains? Its history? What impact did the totalitarian Nazi regime have on the whole area, on the fine social differentiations there, on the possibilities for ensuring survival and on the contradictory relationships? These questions and similar are the focus of an artistic search for traces. Art works have been developed that have been placed in public spaces, in villages and in the mountains, which draw attention to the regions and its history and in particular to the events of this period. These events are thus made visible and brought alive by being viewed and remembered today – providing a contrast to the widespread taboos and to the hyped up stories of heroes, treasure and Nazis.

Such a project was only possible with close cooperation between an institution of the Province, the Institute for Art in Public Space Styria/Joanneum Universal Museum and the region. The artists involved need basic knowledge about the region and its history. It is necessary to involve decision makers and opinion makers. It is necessary to involve people and institutions from the region, who are also interested in making this time period visible. It is necessary to not just present the artistic results – information and communication are also important. For this reason, this sort of presentation of history can also be seen as having the quality of gentle tourism, something for which Ausseerland is known. It will attract a target group interested in nature, culture, literature and art as well as in the intellectual myth of the historical summer retreat. Based on factual information, artistic work finds an unconventional way of looking at this topic and region. An unconventional and artistic perspective can act as an external loosening-up exercise, which can only help to improve the rather cramped way of dealing with the shadows of the region’s past.

Günther Marchner (*1962 in Bad Aussee, living in Grödig and Bad Mitterndorf) is chairman of the organisation Netzwerk Salzkammergut and co-founder of a company for organisational development in Salzburg. He publishes research work on history and culture, is involved in regional development and also works as an author and musician.