Between the Blaa-Alm and Ischler Hütte, located some distance above the Nagl-Steig path in a remote spot off the hiking paths, there is a kind of hollow between the trees and rocks with a magnificent view over the valley. It was here that members of the Austrian opposition once hid from their Nazi persecutors. 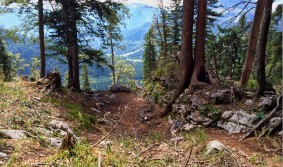 It is undoubtedly thanks to Professor Peter Kammerstätter1 , who died in 1993, that the history of resistance against the Nazi regime in the Salzkammergut region has been documented. Over years of research, mainly conducting interviews with contemporary witnesses, he managed to collect many facts and figures, thus preserving this chapter of contemporary history for future generations2. In the case of the Totes Gebirge resistance group (1944-1945), whom Nazi authorities had never succeeded in tracking down, written sources are scarce. Research has therefore focused on interviewing witnesses3 who were involved in those events as well as on autobiographical texts.4

The historical roots of resistance in the Salzkammergut region date back to the early Labour movement. By the mid-19th century, self-confident workforces, who were prepared to stand up to the authorities and protest against social discrimination, were emerging in century-old salt production centres such as Bad Aussee, Altaussee, Hallstatt, Bad Ischl and Ebensee. Subsequently, from 1867 onwards, the first workingmen’s education associations and consumer co-operatives were founded in the Salzkammergut region.5

Hunger protests and strikes taking place in all Salzkammergut municipalities directly after the First World War and finally, the fight to restore democratic achievements of the Republic in February 1934 in Ebensee, are a result of the Salzkammergut’s tradition of resistance. Members of the Communist party, which had been banned in 1933, were ready to fight in the resistance from the outset of the Austrofascist regime6, and even more so from 1938 to 1945.

Besides the “Bad Ischl Communist Youth Association”, whose members had distributed flyers protesting against the Nazi regime until their arrest in March 1941, the group around international brigadier Sepp Plieseis, is of particular historical significance. Born in Lauffen near Bad Ischl, Josef Plieseis was able to flee from the Dachau satellite concentration camp Adnet near Hallein in October 1943 to the Salzkammergut with the help of Agnes Primocic7. Alois Straubinger from Goisern, who had been arrested directly on the front and interned in Wels district prison, also managed to escape in 1942. Karl Gitzoller from Bad Ischl, who had been active in the Steyr Works resistance group, was the third member of the group founded in 1944, operating under the pseudonym of “Willy-Fred”. These men maintained close relations with Bad Aussee and Bad Ischl. Their aim was to connect all Nazi regime opponents in a network, including those from conservative and Christian circles. In spring 1944, the three aforementioned men decided to retreat to the Totes Gebirge mountains in order to minimise risk for their friends in the valley where they had regularly gone into hiding. All men and women in the resistance movement were used to exploiting the natural conditions of the Salzkammergut countryside to protect themselves. Hiding places in the mountains and dense forests that were difficult to access offered them shelter from Nazi persecution. Their knowledge of routes and paths in the neighbourhood and ability to find their way in the dark and adverse weather conditions proved to be crucial to their survival. Furthermore, their experience in “poaching”, i.e. illegally shooting deer, chamois and roe deer, ensured that they had enough to eat. 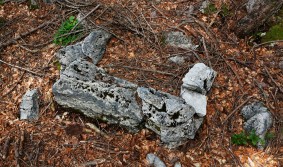 When his son joined the resistance group, the then gamekeeper recommended that the group seek refuge far away from well-trodden routes. The first thing the men did was to check if any smoke from a fire they needed for survival could be seen from the pastures on the opposite side of the valley, and only then did they begin to build their base. They used the so-called Naglsteig path, which was a steep ascent over a cliff face, in order to deliver all sorts of different tools needed to fell trees and move timber. They then began to build their secret base, which they named “Igel” (Hedgehog) after a hedgehog family living there. Perfectly camouflaged with branches and earth, the cave-like hut could eventually accommodate up to 15 men. A door, window, stove, pottery and plain wooden beds with blankets offered minimum comfort. More and more men, mainly deserters, continued to join the movement. Supplies of flour, bread and potatoes were smuggled in via the Alpine terrain of the Rettenbach and Blaa-Alm, especially by women8 and farmers from the surrounding area. Poached meat was smoked or salted in order to preserve it. It is clear that the resistance group would not have been able to survive on the mountain without that network of women and men from the valley who risked their lives to look after them.

The men in the “Igel” almost certainly operated a battery-driven radio in order to keep up with news from the front. Except for the occasional hunting spree or food delivery, their freedom of movement remained greatly restricted. When it snowed, they were not allowed to leave the immediate area of the base in order to avoid leaving footprints. In order to combat cabin fever, Plieseis held political lectures, and probably lessons in bookkeeping and English as well. Women were not permitted to stay at the base to prevent rivalry. Only Marianne Feldhammer visited the “Igel” several times in order to deliver urgent messages.

Although the younger men were calling for proactive operations – blowing up the brine pipeline or the Salzkammergut railway was discussed – it was finally decided to refrain from such actions to avoid increasing persecution. The group on the mountain thus remained undiscovered despite multiple search activities. Despite all precautions however, one of them was murdered by the Gestapo. Karl Feldhammer went down to the valley every now and then to fetch supplies and see his wife and daughter. He was shot at home on 6th January 1945. 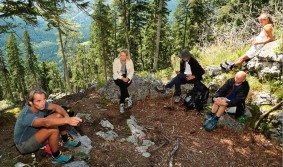 The men and women of the resistance movement represented the “other” Austria. While most people adjusted to, or even supported, the Nazi regime, they chose a different, much more dangerous life. None of those involved ever referred to themselves as a hero. Most of them were ordinary, but politically aware people, who had exposed Nazism as a regime of injustice.

Operating as “Austrian Freedom Movement” during the days of Austrian liberation, the resistance movement subsequently disbanded. Carried away by euphoria during the following period of reconstruction, however, perpetrators and followers across Austria quickly considered themselves as victims, whilst the real victims, including those men and women who had been in the resistance, were confronted with scepticism.

The fact of the matter is that those men and women’s heroic struggle against Nazism has never been appropriately recognised. We are therefore greatly indebted to Professor Kammerstätter and his research for ensuring that their resistance will never be forgotten.