Nazism and the Second World War brought long-term changes to the political, social and cultural landscape of Europe.Even small regions such as the Salzkammergut, which had remained largely untouched by military acts of war, were affected by major events during the end of the war. After the war, the events were mythologised and it was not until decades after that they were critically questioned, often in the context of heated debates.

The Second World War was the culmination of a period of violence in Europe, a second Thirty Years’ War, which started at the beginning of the 20th century and gradually increased in its severity. Military conflicts, conquests and battles were only one part of this conflict. The Second World War was primarily a war against the civilian population, a war of destruction and race, over the course of which, numerous ethnic and religious groups were persecuted and murdered. Roughly half of the ca. 40 million victims in Europe were civilians and around six million of these were Jews. The Second World War was also a European civil war during which every country fought for the political order of the future – fascism, communism or liberal democracy. The war also brought social change, altering European society down to its very roots. Conflicts surrounding national minorities in the previous decades prompted genocide, expulsion and population exchange, leading to the development of ethnically homogenous nation states.

Initially, Austria was largely unaffected by acts of war. Although numerous towns began to be bombed by allied forces in the summer of 1943, the allies’ ground troops did not enter Austrian territory until 29th March 1945, when the Red Army began the process of conquering Vienna. Larger battles therefore only took place in the East of Austria; the invasion of the Western Allies at the beginning of May 1945 happened without much combat being necessary. However, the British and Americans assumed that large German units had hidden themselves in an Alpine Fortress to prepare to fight for a “final victory”. Indeed, it was true that many German Reich military units and collaborating troops poured into the regions not yet occupied by the allied forces. However, the Alpine Fortress was mainly a myth, as it was not until two days before Hitler committed suicide that he gave the order to build the fortress. 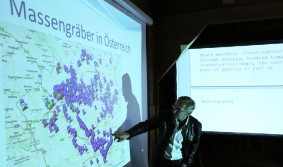 During the final stage of the war, Austria was far more affected by so-called end phase crimes. At the end of the war, the Nazis increased their terrorisation of all groups within their power, projecting their anger onto concentration camps prisoners, Jewish and Slavic forced labourers and political opponents interned in concentration camps or forced labour camps. Around 20,000 Jewish slave labourers were forced to participate in “death marches” from the south-east wall on the Austro-Hungarian border to the Mauthausen concentration camp. Thousands died during the march. The majority of prisoners in Mauthausen sub-camps in the east and south of Austria were evacuated on foot and hundreds were murdered on the way to Mauthausen or to the remaining sub-camps such as Ebensee. The Nazis increasingly focussed on terrorising their own people. Anyone who no longer wanted to support the battle for the “final victory” risked being brought before a court martial or SS unit and executed as a deserter or resistance fighter. By the end of the war, the east of Austria was filled with mass graves.

How does a country and its people deal with a past like this? The first interpretation of the events of the previous years came with the Austrian declaration of independence on 27th April 1945. The Anschluss of 1938, which had largely been welcomed by the population, was interpreted as having been “forced” on the country by means of military threats, terrorisation and occupation. Hitler had “led the powerless and will-less Austrian people into a senseless and hopeless war of conquest, which no Austrian ever wanted”. This was the start of the victim theory, according to which Austria was seen as the first victim of Nazi expansion policies. Only a “highly treacherous” minority had supported the Nazis.

The victim theory served two purposes – one in domestic policy and one in foreign policy. In foreign policy, the victim theory furthered the goal of establishing a state treaty and ending allied occupation as soon as possible. It was supported by the Moscow Declaration of 1943, whereby the allies agreed to re-establish Austria as an independent country. In domestic policy, the victim theory served the purpose of bridging the deep gaps between the different political camps, in particular that between the Social Democrats and the Conservatives, who had particularly come to blows during the interwar period. According to the “Geist der Lagerstraße” theory, shared experiences of being persecuted by the Nazis had prompted a reconciliation of the two sides and led to the decision to reconstruct Austria together. 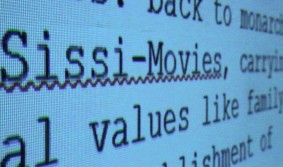 Instead of talking about the difficult memories of the “Thousand-Year Reich”, the “Thousand-Year Austria” began to be celebrated shortly after 1945. The Sissi films, a trilogy of films about Empress Elisabeth of Austria, created a perfect portrayal of the cliché of the good old times. Upon closer inspection, it becomes clear that the films also show that men do every wrong and that women are the ones really making the decisions. This is a clear sign of how much gender roles had been changed by the war.

In 1986, the Waldheim affair caused the victim theory to be officially questioned for the first time. It was not until 40 years after the war had ended that it became possible to talk about the fact that many Austrians had welcomed the Anschluss of 1938 with great enthusiasm, that many of the high-ranking Nazi officials had been Austrians and that many had profited from the robbery, expulsion and murder of Austrian Jews. Finally, in the 1990s, Austria started to not only commemorate its own victims but also other victims, the murdered concentration camp prisoners, Jews, resistance fighters and Wehrmacht deserters. Although there are only a few people still living that personally experienced the Nazi period and the war, working with memories of this time is still a difficult task.

Alexander Prenninger (*1968 in Braunau, living in Salzburg) is a historian, a freelancer at the Ludwig Boltzmann Institute for Historical Social Science and lecturer at the University of Salzburg with a research focus in national socialism, concentration camps, concentration camps memorials, oral history and rituals of remembrance.