Since the Third Reich had long planned the Austrian Anschluss, it only took the Nazis about two hours to take over even the remotest of regions after seizing power in Vienna. Dissidents immediately came under increased pressure from the totalitarian regime. (more here) 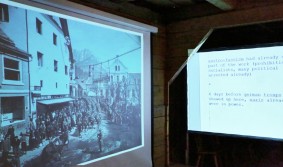 When at 7 pm on 11th March 1938 newly appointed Federal Chancellor Arthur Seyß-Inquart (1892-1946, condemned and executed as a war criminal following the Nuremberg trials) made an announcement on the radio requesting the Nazis to help Austrian executive forces restore law and order, this was the signal for Nazi takeover on a local level. The following events proceeded in Ausseerland according to an overall 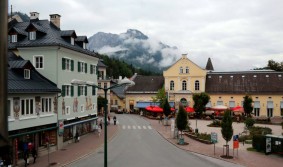 Austrian scheme, and how smoothly they ran proves just how well the Nazis had prepared themselves for this “unexpected” incident.

In 1938, municipal executive forces already counted numerous Nazis in their ranks; the same applied to the local Front Militia1. Illegal party members holding no official function in executive forces had gathered in local meeting places to hear Seyß-Inquart’s speech. They then marched to all gendarmerie stations where all non-Nazi gendarmes and members of the Front Militia had already been disarmed and local SA men armed. Declared anti-Nazis such as station commander Valentin Tarra2 were arrested immediately. The SA took over executive functions, occupied all official buildings and patrolled municipality areas to restore law and order – just as Seyß-Inquart had requested.

As everywhere else in Austria, the Nazis had completed their takeover of the Ausseerland region by 9 pm at the latest. Some 1000 “ethnic comrades”, celebrated the occasion in Bad Aussee with “speedily organised festivities” including a torchlight procession accompanied by brass band music and a “mighty rally”. Apparently, there had been no open resistance against Nazi takeover – the local Anschluss had run smoothly hours before first German troops had even crossed the Austrian frontier.

The Anschluss marked the beginning of Nazi persecution in Ausseerland, too. After a number of people had already been detained on the evening of 11th March, the next day saw a whole series of arrests in the course of which many were threatened with imprisonment in concentration camps for mere trifles, for instance, one of them – a man from Altaussee – had referred to SA men as “rascals”. Jewish Dr Robert Weishut was amongst the first people arrested. Although there was no concrete proof of his alleged Communist leadership, he was sent to Graz and then to Buchenwald concentration camp on grounds of his presence being intolerable “for the NSDAP Section Bad Aussee”. After being released in April 1939, he managed to flee abroad.

Unfortunately, Dr Weishut was not the only Jew in the Ausseerland region who suffered from Nazi persecution. Although pogrom-like atrocities did not occur during the Anschluss as in many other places, orders were strictly carried out, for example, to immediately depose all Jews from official posts.  Moreover, the Nazis tried to remove everything “Jewish” from public space: they blew up a plaque in Grundlsee bearing the inscription: dedicated to Konrad Mautner, an unforgotten friend and researcher of local customs, and removed his name from the path that had been named after him. They also removed the memorial to the founder of the Bad Aussee health resort, Dr Josef Schreiber. Later on, Schreiber’s daughter committed suicide to escape falling into the hands of the Gestapo.

Jewish homes in Ausseerland were especially coveted. In the second half of the 19th century, the remote region had already established itself as a summer destination that attracted wealthy visitors, including many Jews. Subsequently, quite a lot of mansions and real estate in Ausseerland municipalities were Jewish-owned. Since the Styrian Gauleitung had already decided in May that “ethnic comrades” needed to spend their summer holidays “without being bothered by the presence of Jews” and that Jewish people would therefore not be allowed to visit Ausseerland, many country mansions and summer houses remained empty.

Although expropriation of property was the final stage of aryanization measures, this did not apply to Ausseerland, because a special regulation had been put in place for the Salzkammergut’s vacation region. Empty property owned by German citizens, for example, could also be expropriated. The “expulsion of Jews” as decreed by the Gauleitung had in many cases paved the way for that possibility. A total of 76 properties in Ausseerland municipalities were “aryanized” with the help of those special regulations. Only a few, such as the painter Christine Kerry (1885-1978), managed to escape expropriation. In the years before 1938, many distinguished people from the world of culture had been her guests at the renowned Villa Kerry, which was situated in a wonderful quiet spot overlooking Altaussee village, featuring the so-called Great Artistic Panorama. Although this lady of Jewish origin was allowed to stay in Altaussee, she was forced to house high-ranking SS official Ernst Kaltenbrunner at irregular intervals as well as his mistress for a longer period of time. At the end of the war, Kaltenbrunner fled to the Totes Gebirge where he was arrested on 12th May 1945. He was sentenced to death at Nuremberg. In spite of a bomb attack committed by a local resident, Christine Kerry and her mother survived the Nazi regime in a different house in Altaussee.

–––––
1 A paramilitary unit of the Fatherland Front that had been alerted on the morning of 11 March 1938 in order to confront a possible German invasion.
2 Tarra had gained a reputation for his role in crushing the 1934 Nazi coup. Later, he participated in the local resistance.