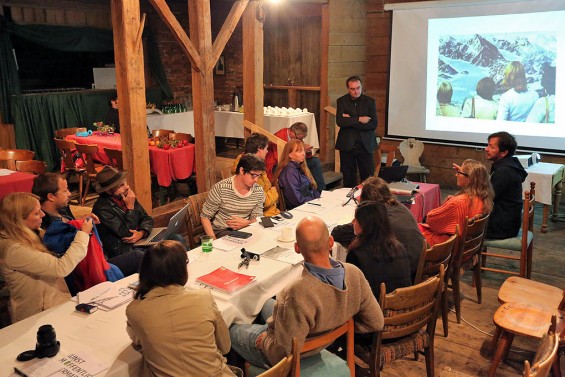 Landscape first became a scenic backdrop in the year 1336, rendered through Petrarca’s view of Mont Ventoux, and has enjoyed special cultural meaning ever since.1

Today the reassurance of nature as a cultural landscape is shaky in terms of its success.2 Ecological and climatic encroachment by industrious humans will be detectable on the Earth’s crust for millions of years and is thus intrinsically political. Against this general background, the project Political Landscape with its artistic contributions focuses on the history, the social spaces, and the protected natural landscape of an area of Austria that is very unique with regard to social structure, economics, and historical importance—Ausseerland in the Salzkammergut region of Styria.

To this day, the region has lost none of its appeal, and has salvaged a collective political history that has moulded this part of the countryside and its people. In the mid-1940s, a great many actions both for and against Hitler’s fascist rule were concentrated here in the Austrian Salzkammergut, a traditionally popular summer resort formed by a triangle that stretches between the high mountains of the present-day states of Salzburg, Upper Austria and Styria. Parts of the proto-partisan-like resistance used the impassable areas of the high mountains as retreat. Aftre the collapse of the Nazi-Regime also National-Socialists were hiding in the mountains or lived anonymously on the region. Likewise a burning lens many events culminated until May 1945 as for instance art robbery, betrayal, active and passive resistance, escape and murder. These complex and ambiguous times have normative effects on our political system until today. 2015 marks 70 years since Europe’s liberation from national-socialist totalitarianism, at which point only few living witnesses will remain.
The research project “Political Landscape” addresses a specific landscape within which the research group sculpture will process the issue of individual and collective memory in several steps. Part of the project’s research will be located in the valley, and another part in the high mountains. The artworks develop new perspectives on the landscape and help to enhance a broad regional debate and social awareness of the political of landscape and everyday culture from a contemporary artistic perspective.

The project is structured as follows:

The works of the artists will be first presented in Altaussee on 11 July 2015 and will be accessible thereafter at least until autumn 2016.

In the scope of an exhibition on the topic of Landscape, Kunsthaus Graz will be offering a taste of the outdoor works in Ausseerland from 11 July to early September 2015. A catalogue will be published by Sternberg Press, Berlin, with the opening in July 2015.

This project has been inspired by Eva Grubinger. Her idea was to take those historical events and sites as a starting point for artistic thoughts. This connects the region with nowadays developments in the art field. For a long time artists use research-methods to generate knowledge in a non-scientific way. To this field belongs the recently so-called artistic research. The supplementary “artistic” sets the open method free of scientific legitimisation. Hence it is a means to make art.

The international workshop with artists and experts connects aspects of geology, history, and sociology of Salzkammergut including the actual spatial planning of the region in order to combine historical with 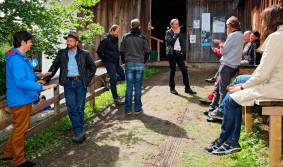 contemporary information. The internal workshop was planned and prepared in cooperation with Dr. Günther Marchner of Network Salzkammergut (www.netzwerk-salzkammergut.net). For the workshop inputs to the following topics were given: social history, history, traditional handcraft, regional spatial planning, agriculture and forestry, pathway systems, artistic research. Alongside knowledge transfer, the workshop’s goal is the early communication with local representatives and/or groups.

The project regards the mountain landscape beside its natural appearance as a social fact, being in constant interdependency with human acting, thinking and feeling. It is subject to historic and natural changes. Landscape changes in this perspective from a noun to a verb, or from an object to an acting in public space. Insofar public space has always been viewed as the terrain of the inner-city, yet today with increasing urbanisation, tourism, transport infrastructure, and new technology it extends to the outlying countryside. The concept of public space may be applied to the mountains ranges beyond the cities, which are freely accessible for everyone and even supported by Styrian law based to the “right to roam” (§ 5 Steiermärkisches Wegefreiheitsgesetz 1922).

History
Political Resistance in the Salzkammergut 1943-1945

In the 19th century the Salzkammergut was a popular destination for city dwellers in search of relaxation. Today it is the best-developed cultural and touristic region in Austria. The name is 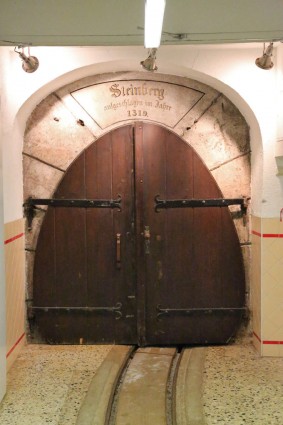 attributed to the salt mining that took place here under imperial rule, and an eventful history has left its traces across the Salzkammergut’s picture-book landscape. This is a history interlinked with that of the forestry, mining and tourism industries, with the literature and fine arts of the Romantic Era, as well as the political events of the 1930s and 1940s’ war years. Salt mines were used to protect people during air raids, and misused by the Nazis as bunkers for looted art. Only through insubordination during the last days of the war could this cultural potential be salvaged from destruction by the Nazis. Legends are spun of Nazi treasures buried deep at the bottom of a lake. However these mountains also provided refuge and escape for the Austrian Resistance to the dictatorship of the Third Reich, the history of which is a far less known.

In acts of nonviolent local resistance men and women supported for example escapees from concentration camps or army defectors who were hiding in the mountains. Beginning in 1940, a group was formed in Bad Aussee around the figures of Albrecht Gaiswinkler, Hans Moser and Valentin Tarra. During the final days of the war in 1945, in an unsuccessful attempt to arrest the Reich Propaganda 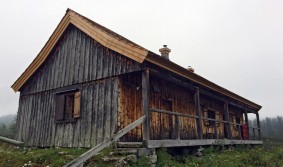 Minister, Joseph Goebbels, Gaiswinkler parachuted over the Höllengebirge mountains together with Josef Grafl. Another group of conspirators was formed by Sepp Plieseis in 1943, following his escape from an outdoor warehouse at the Dachau camp. Agnes Primocic, Mali Ziegleder und Theresia Pesendorfer were among the group’s supporters. Plieseis contributed to the capture of Ernst Kaltenbrunner (Chief of the Security Police and the Security Service of the SS, as well as the Reich Main Security Office), which took place on the Wildenseealm near Altaussee. Edith Hauer-Fischmuth performed life-threatening acts of passive resistance by sounding out high-ranking Nazi officials at the Seehotel in Altaussee and used this information to save people in peril. For these acts, Hauer-Fischmuth was distinguished with the honourable title of “Righteous Among the Nations” by the State of Israel in 1999.

Directly following the war, many activists involved in the events of this period were employed either in municipal or city councils. Then, with the onset of the Cold War and its ideological infighting, they found themselves once again on the defensive and, ultimately, sunk into oblivion. The scenes of these noteworthy events remain hidden from both the locals and the tourists to the region, with only a very few exceptions. The Ebensee Society for Contemporary History (Verein Zeitgeschichte Ebensee), for example, has marked the site of the Willy-Fred group’s hiding place – “IGEL (The Hedgehog)” – with a commemorative plaque, albeit difficult to find. 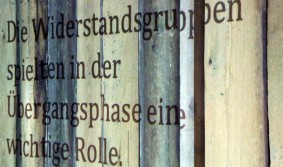 The artistic projects detailed on the websites listed below originate from a workshop that focused on researching the Salzkammergut and Ausseerland regions. The workshop was held from 14–24 August 2014 in Bad Mitterndorf, Bad Aussee, Altaussee, and Totes Gebirge. The artists are introduced here with reference to a selection of their individual works. Their respective proposals for Aussee are only briefly mentioned since, once realized, the project will be entering a second phase. Certain sites, aspects, and technical details may change in the individual designs over the course of the project.

Dirck Möllmann, born in 1963, died in 2019. Former curator at the Institute for Art in Public Sphere Styria, Universalmuseum Joanneum.