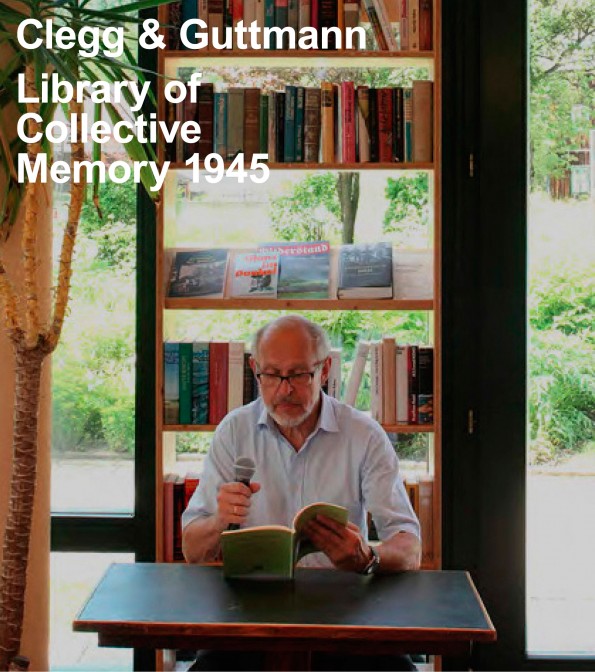 In the reading room of the Literature Museum Altaussee, residents, visiting travelers and those who are curious will find selected bookshelves containing literature on the topic of individual and collective memory of the time around 1945. They are invited to read passages aloud. These readings will be broadcast into the mountains by microphone via the internet. Near the Blaa Alm there is a receiving station designed to transmit the signal to a loudspeaker. At Kunsthaus material and sound samples on the subject are on display.

Today’s Kur- und Amtshaus is situated in the former Auspitz Villa, built in 1884. The old Jewish Auspitz family originally came from Moravia, coming to wealth in the Austro-Hungarian Empire. The Viennese banker and industrialist Rudolf Auspitz purchased the newly built villa for his stately home in 1886. He loved Altaussee, and the Ausseerland was a preferred summer resort of Vienna’s upper middle class. Sigmund Freud was a visitor to the health resort at the end of the 19th century as were Hugo von Hoffmannsthal, Theodor Herzl, Artur Schnitzler, Karl Lueger and many others. The entire property of the Auspitz family was “Aryanized” by the Nazis in 1938. Bank partner and proprietor of the villa Stefan Auspitz was deported to Theresienstadt Ghetto in 1942 and then to Dachau concentration camp. He lived only a few months after being liberated in 1945. The building was restituted after the end of the war, purchased by the municipality of Altaussee in 1966, and renovated and converted into the Kur- und Amtshaus in 1992. In addition to the municipal administration, post office, and tourist information office, it also houses the literature museum with reading-room, book shop, and reference library. http://literaturmuseum.at 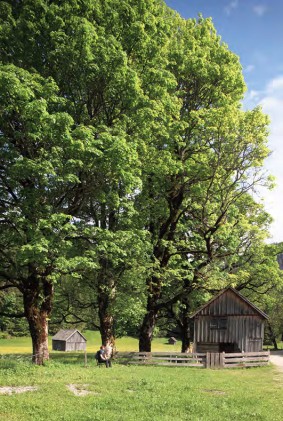 The array of buildings on the expansive alp consists of several houses and isolated dairyman’s/herdsman’s cottages. The modern-day inn was built in 1988. The older timber building next door was built more than one hundred years ago and witnessed the events of 1938–1945. The men of the Willy-Fred resistance group at the Igel were occasionally supplied with food by local women and farmers through caches near the Blaa alp and Rettenbach alp. The residents of the alp were not privy to these activities, that would have been too dangerous.

Adolf Eichmann began his flight here in spring of 1945, traveling via the north of Germany and South Tyrol to Buenos Aires/Argentina via the “Ratline.” The SS-Obersturmbannführer was a major figure involved in the deportation and systematic annihilation of an estimated six million Jews. His wife lived in Altaussee together with three children under her maiden name Veronika Liebelt for several years until 1952, later following her husband. Eichmann was abducted in Argentina by a secret Israeli detachment and taken to Jerusalem in 1960, where he was executed in 1962 following a high-profile trial.

Through the mediums of photography, installation art, and object art, Clegg & Guttmann analyse the structures of societal power and its representation. 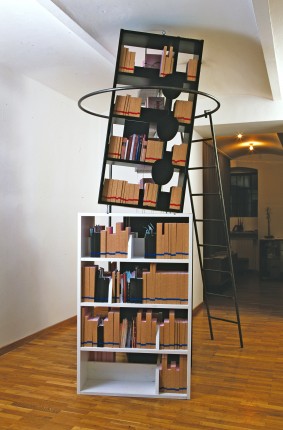 This may lead to works of monumental scale thematising public commemoration and the problematic question of national identity, as with the Monument of Monuments for Unity & Freedom (2010), a proposal for a public competition in Berlin. But this is also masterly achieved through the classic genre of portraiture, for the aesthetics of the stately portrait have remained closely associated with politics and sovereign power since the Renaissance and Baroque periods.

Assembled in a portrait, as in a landscape, are not only the individual features of a person or group of people, but also their claim to power and signs of their position within society. In Clegg & Guttmann’s work, models that predominately originate from their circle of acquaintances are arranged subtly and obviously in equal measure. They each assume a certain role, for instance in portraits of families, companies, or artists. They become semiotic vehicles against a factitiously imposed backdrop, which coalesces fragments from other pictorial traditions. The portraits become multilayered analyses of self-representation in the context of the social world – immersed in the artist duo’s conceptual slant on art, which gives rise to a further realm for reflecting on medium, image, and subject of depiction.

Clegg & Guttmann establish connections between pictorial surfaces, three-dimensional objects, and their spatial order, thus directly addressing social communities. For example, their installed and freely accessible glass-encased bookshelves called The Open Public Library1 were developed, starting in 1991, for public use and various locations. Each and every participant is allowed to remove books from the shelves and is invited most especially to place his or her own books inside. An almost consistent principle in the artistic work of Clegg & Guttmann is activating involvement on the part of the beholder. Together with those engaging with the social sculptures and installations in public space, these works sketch a vague collective picture of a group, a site, or a city district.

In the town of Altaussee, Clegg & Guttmann will be placing literature on the topic of Political Landscape in the Literature Museum so that Aussee residents and visiting travellers can read select passages aloud. The readings will be broadcast into the mountains by way of microphone. Near the Blaa-Alm there is a receiving station designed to transmit the signal to a loudspeaker in the forest. Passers-by who just happen to stroll past are then able to listen to the reading.

Clegg & Guttmann (Michael Clegg, b. 1957 in Dublin, Martin Guttmann, b. 1957 in Jerusalem, live in Berlin, Vienna, and New York) moved to New York in 1978 to study at the School of Visual Arts under Joseph Kosuth and formed a lasting artist duo in 1980. Their artwork is highly regarded internationally and was already shown early on at documenta VIII (1988) and the 46th Venice Biennale (1995). Both frequently and gladly work in and with public space.

Gasthof Blaa Alm is situated at Lichtersberg 73a and can be reached by car. The inn provides accommodation and food. Walk north, upstream along the hiking trail on the left of the Augstbach, via Ramsau to Blaa Alm.
Open all year. Brief closures are possible in November and in early spring.