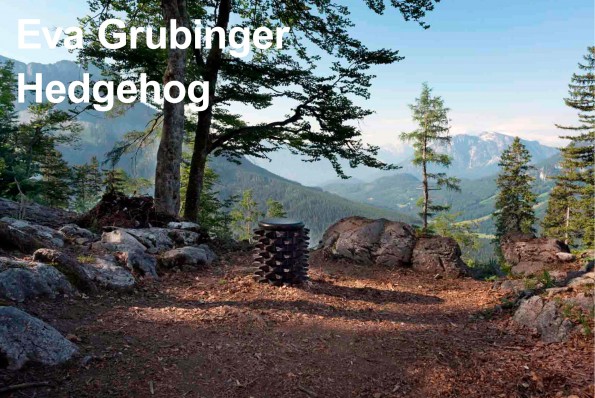 This sculpture at the former Igel (Hedgehog), the fabled retreat of Austrian oppositionists used from 1944 to 1945, directs the gaze towards the Sandling mountain, which contains the salt mines where artworks looted by the Nazis were stored. Among the works they seized was a substantial portion of the collection of Oscar Bondy: the round, bristly form of the sculpture is derived from a similarly designed but smaller wooden object that he once owned. A second edition is located in the spa park of Altaussee.This property, owned by a distant relative of Bondy, was “Aryanized” in 1938 and restituted after the war. The third edition of the same object is on display at Kunsthaus. Please don’t touch. 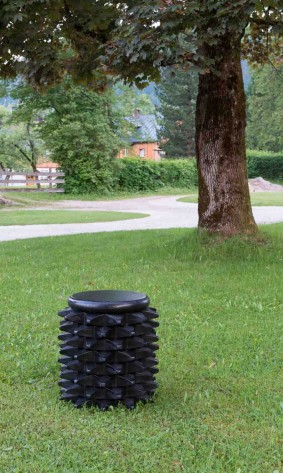 Today’s Kur- und Amtshaus is situated in the former Auspitz Villa, that was built in 1884. The important Jewish Auspitz family originally came from Moravia in the modern-day Czech Republic and came to wealth in the Austro-Hungarian Empire. Banker and sugar manufacturer Rudolf Auspitz took over the newly built summer residence in Altaussee in 1886. The park-like garden with a greenhouse was created shortly after. The Nazis seized the entire property in 1938. Rudolf’s son Stefan Auspitz, bank partner and owner of the house at that time, was deported to Theresienstadt and later to Dachau concentration camp and lived only a few months after being liberated.

Rudolf Auspitz was a distant relation by marriage of Oscar Bondy, who owned sugar factories in Bohemia/Czechoslovakia and also lived in Vienna. Bondy managed to escape persecution immediately after the “Anschluss” of Austria by the Third Reich in 1938 and died in New York in 1944. His assets and extensive art collection were “Aryanized.” The most valuable objects and paintings were kept in the central storerooms of Vienna’s Museum of Art History, from where they were finally stored in the Ausseer Salzberg as part of the looted art. Restitution of the Auspitz Villa was made after the end of the war. The municipality purchased the building in 1966, converting it into a “Kurhaus,” or spa house, with gardens in 1969. The building was completely refurbished as a “Kur- und Amtshaus” in 1992. 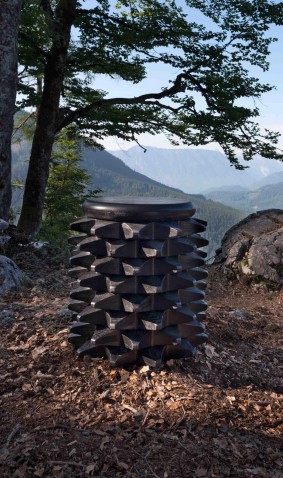 The communists Sepp Plieseis, Alois Straubinger and Karl Gitzoller founded the underground group Willy-Fred in November 1943, after escaping from the Dachau subcamp in Hallein (Plieseis) and from the police prison in Wels (Straubinger), with the aim of building a resistance movement in the Ausseerland. Among the members were Resi Pesendorfer, Zilli Langeder and Maria Ganör. Living outside of the law was extremely dangerous despite support from the women and other accomplices.

In spring 1944 they withdrew to an altitude of 1280m in the western part of the Tote Gebirge, a relatively inaccessible area even today. The women stayed in the valley. Hans Mittendorfer, the son of the forest warden, joined them. They broke his foot so that he would not be sent to war and could stay with them. His father pointed out this location, and kept this information a secret. The place was called Igel (Hedgehog) because the animal had appeared while they were building the hide-out. Freshly felled tree trunks and bark offered makeshift protection from the wet and also served as camouflage. There was a fire, a radio, a few books, and even a glass window. Over time, the group grew to about fifteen or twenty. They were victims of persecution, deserters and religious people like Karl Feldhammer, with the common political goal of restoring a free Austria despite all their ideological differences. They were armed for defense and for poaching and also had some explosives. Visiting his house in Altaussee one night, that was being watched, Karl Feldhammer was shot by the Gestapo while trying to escape on 26 January 1945.

“Our political work was primarily and untiringly to educate the population. We lacked the technical equipment for educational work in writing. We never engaged in any military actions against our opponents as a group. We constantly informed ourselves about the course of the war and the international situation. We listened to English and Russian radio stations in German.” (Alois Straubinger, in: Rolinek 2005, 108 f.) The “Verein Widerstandsmuseum” installed a commemorative plaque near the former Igel in June 1994. 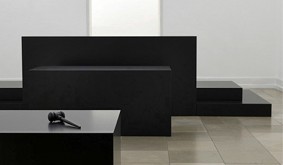 In Grubinger’s artwork, content assumes artistic form through material, colour, proportion, corporeality, and ultimately also through the lightness of reduction and its playful elegance. Extensive thematic research flows into space-encompassing exhibition situations which appeal to the visitors in ways that are both candidly sensuous and aesthetically reflective. Here, Grubinger’s works repeatedly hark back to the elementary questions of form posed during modernity, related to the function, utilization, and autonomy of art. But her themes are political, with the artist subjecting the traces of modernity to interpretation from a present-day perspective. History is associated with the power of historiography, and it is here that, for Grubinger, the actual significance begins today: What is remembered and what is forgotten? And, most especially, how are these temporal processes sourced as a spatial trail or three-dimensional sculpture in our present?

The artist for instance developed, together with students from the University of Art and Design Linz, a clear three-dimensional form called Five Serbs (2010) – a free-standing wall 8 meters long and 2.3 meters high – which divided an exhibition room in Trondheim. Black textile fabric spanned both sides of the wall along its entire length. Visible under the wall were protrusions that stretched the fabric and fostered impressions ranging from unfamiliar to uncanny. The history behind this artistic form goes back to the death of the forced labourers, many of whom were Serb nationals, involved in building the exhibition venue – the former submarine pen for Dora I – during the German occupation of Norway (1940–45). Members of the Todt Organisation were responsible for their deaths. According to an unsubstantiated oral history, five of the workers were thrust into liquid concrete. Five Serbs became a temporally bound memorial embodying traces of a history that is only reluctantly acknowledged in memory.

In Altaussee, Grubinger will apply her project proposal to the fabled retreat called Igel (Hedgehog) in the Totes Gebirge region. It was used from 1943 to 1945 by Austrian oppositionists who went into hiding from the National Socialists. Initially, their secret hideaway was populated by up to four people, who were soon joined by around twenty men. The artist has designed a useable sculpture that provides visitors with a seat facilitating a view of the landscape. The round, bristly form of the sculpture is derived from a similarly designed object once owned by Oscar Bondy, whose collection was Aryanised by the National Socialists in the 1930s. The most remarkable works in Bondy’s collection counted among the looted art stored in the Altaussee salt mine. Grubinger’s sculpture is to be placed both at the Igel retreat and in the town of Altaussee.

From the Blaa Alm heading roughly 500m north, go right, slightly downhill, fork left down to the Rettenbach, then cross the bridge going right, and fork left to follow trail 226 through the woods over a small footbridge, then a steep climb through the woods along the Naglsteig (Florian Hüttner). After a climb of roughly 45 min. the terrain becomes almost flat in a young spruce plantation, look out for a large rock with a pink dot to the right of the path (GPS N 47° 41.197 / E 13° 45.204). Turn right here and follow the pink dots across rough terrain (heavy windthrow) to the site of the former Igel. No marked trail. Only do this walk in daylight, preferably with GPS. Then go back along the same path (look out for pink dots!) and continue along trail 226 up to the Beerensattel (Angelika Loderer).

Mountain hike for experienced walkers. The steep Naglsteig has exposed passages, surefootedness required, secured with cables in places. You can avoid the Naglsteig by going downstream along the Rettenbach up to the signposted crossroads, turn right and ascend along forest path 211a leading to the Ischler Hütte. After about an hour and a half below the Beerensattel, turn right on to the narrow path 226 (Blaa Alm/Naglsteig), walk back downhill through the woods to the Igel fork (fork left at GPS N 47° 41.197 / E 13° 45.204).